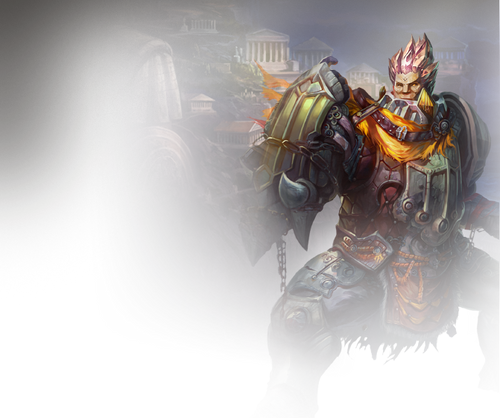 In the world of Eyrda, the Stonemen represent the strongest and bravest warriors.'

Stonemen are a fearless race, proud of their strong bodies and tough skin. When war breaks out, you will see the Stonemen on the front lines. Their giant bodies reassure their allies and boost morale of surrounding troops. Stonemen are not only natural born warriors, but they are experts at blacksmithing. They can craft the deadliest weapons in the world of Eyrda.

The Stonemen race creates a unity with the other races. With the Elves they created the Union of the Woods. The Lionheart Knights of the Humans also joined this Union. The Stonemen and Dwarves worship the same god named Tytan, this creates and inseparable bond between them. It's long been said, "Where there are Stonemen, other races will face no danger." This phrase best explains the relationship the Stonemen have with the inhabitants of Eyrda.

The Stoneman race is entirely male. Every hundred years a special ceremony is held at the stone altar. When the ceremony is finished, the outer layer of the giant altar fades away and gives birth to new Stonemen, who walk the land for the first time.

The first Stonemen were created by Tytan. He crafted them in his own likeness and charged them to perform as his servants.

Tytan was pleased by the fervent loyalty and dedication of his new servants, so he decided to create more. He did this y carving them from a special rock and conferring upon his carvings a portion of his power.

After the second Nino War, Tytan entered a twisted dimension and could not return. Without Tytan, the means to create new Stonemen was lost, and their population stagnated. Solarien, god of the Sun and friend to Tytan, took pity upon his friend's favored servants. Solarien taught the Stonemen the secrets of the Birthing Ritual, allowing the Stonemen to perpetuate their race.

The Stonemen are divided into two classes according to their origin. The first class is comprised of those who were carved from the Natuo Stone by Tytan himself and blessed with a portion of the god's power. The second class encompasses the Stonemen created from the Birthing Ritual taught to the Stonemen by Solarien after Tytan's disappearance.