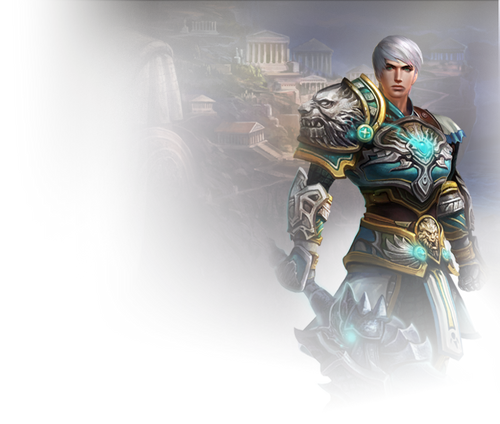 A Human's ability to adapt, potential to learn and charisma have led this race to assume a leadership position amongst all races of Eyrda.

After Shyntola was broken, Humans sailed to Ousta with the other races. They are especially close to the Dwarves.

Humans worship the god Vyda, who stands for wisdom and soul. After the birth of the Humans, Vyda put them in a remote western land of Ousta. It seemed that Vyda did not care for the Humans, but in actuality Vyda changed his appearance to walk among the Humans teaching them skills and the art of war. As a result of Vydas' efforts, the Humans inherited his character and creativity. When war breaks out, the Humans are the first to assemble and lead the other races to defeat their foe.

Among the Humans is the great Hossinger Apelio, the creator of the Lionheart Knights and other great legends such at Wote Malong and L'ygch.

The Humans have a history of showing great heroism in dire times, making them the strongest of allies.

Amongst the five [[races] of Eyrda, the Human lifespan is the shortest, and rarely does a human live more than 100 years. To counter the brevity of their lives, Humans reproduce at a much faster rate compared to the other races. In addition to being quick learners, Humans are the most adaptable race. They will often persevere through challenges that would have devastated other races that are more bound by their traditions. Humans are renowned for their creativity, a trait favored by Vyda and therefore held most dear by the Humans.